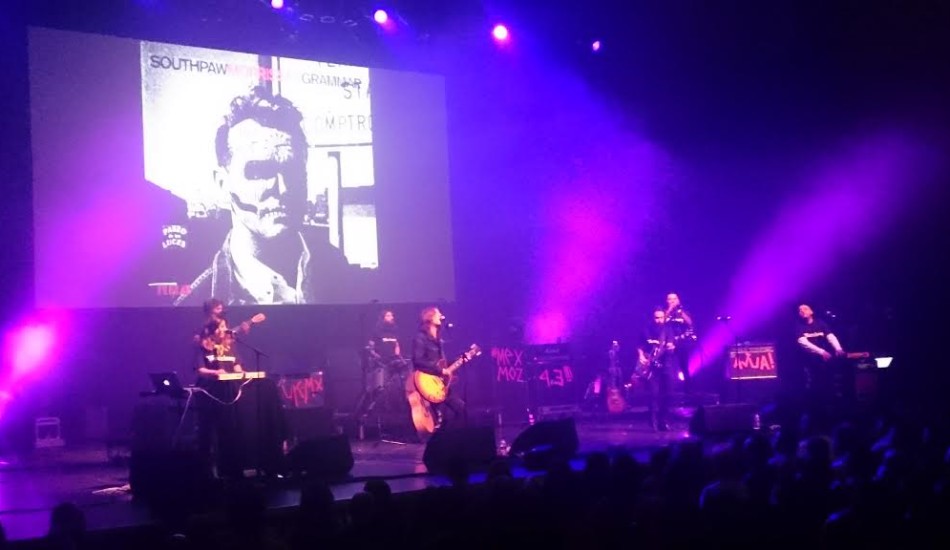 Diehard fans of The Smiths will always try and convince you that “you can dance to Morrissey!” But it’s a dance best saved for the bedrooms of said diehards – gladioli and Yeats in hand. So you can imagine our intrigue at hearing that a group of Mexican musicians had formed to cover the Morrissey/Smiths canon in their own trad styles. And, right on cue, Mexican music doesn’t often sit down, or shut up. Even those with rudimentary knowledge of Latin music will know it’s all about the dance. We had to check it out.

With the lights going down on a seated audience, football terrace style chants of “Morrissey, Morrissey, Morrissey” cried from the sold out 2000 capacity Barbican space. After an authentic starter of traditional Mexican folk, ‘El Primero Del Gang’ (First of the Gang to Die) set the tone. The trumpet resonated loud and proud, heralding in a totally unique experience. Making ‘Everyday Feels Like Sunday’ sound jolly and chipper is no mean feat, but Mexrrissey nailed it with the offbeat, lazy ska guitar rhythm. A handful of people were now on their feet. By ‘Dime’ (Ask) and ‘Panico’ (Panic, obvs), the whole room was roused. ‘El Boca’ (Bigmouth Strikes Again) got all electronic and ‘El Hijo Soy’ (How Soon is Now) was a solid closer. It was also a genuine surprise – HSIN is notoriously hard to cover. What happened? The Mexicans replaced haunting, effects-laden guitar lines with a Mariachi trumpet.

The sound was as full as you’d expect from the Barbican and the entertainment fantsático. You can indeed dance to Morrissey. The only questionable aspect is the name: why not Heaven Knows I’m Mexican Now? Frankly Senor Shankley? No matter. By the end, the chants from the terraces had morphed into “Mexrrissey, Mexrrissey, Mexrrissey.”