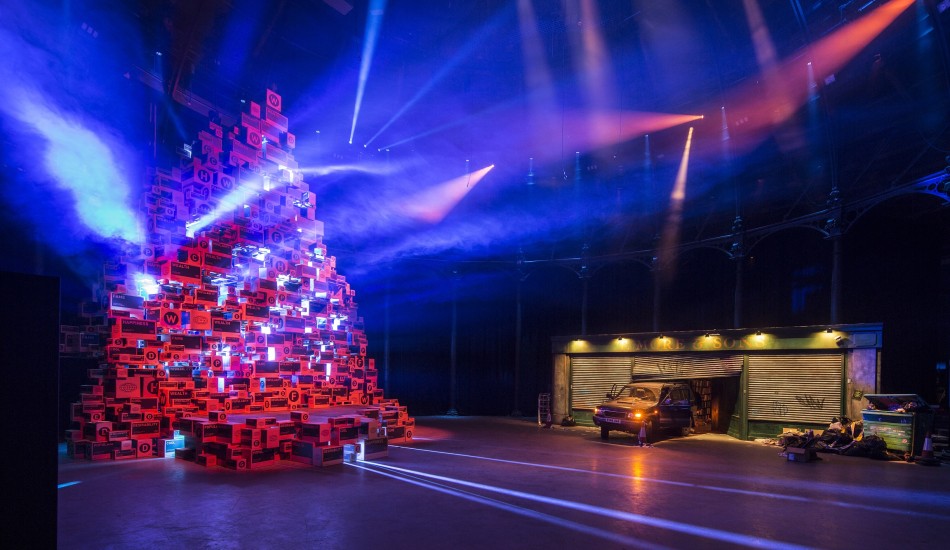 Utopia, the imagining of the much-lauded artist Penny Woolcock, is guaranteed to be like nothing you have experienced before. Entering the hall, you are blinded by the lights shining through the huge altar-like tower in the centre of the space made from cardboard boxes with imprints on each describing the contents within: cool, desirability, fame, wealth, etc. Then you’ll notice the crashed 4×4 at the side of this temple of consumerism that appears to be coming out of a half-shuttered bookshop.

Stepping over the threshold, it becomes apparent you are stepping into a scene fresh out of an inner city riot. The speakers hidden all over the shelves and in the post-riot street scene behind the bookshop project the stories of scores of people – some on the arbitrary nonsense and utter futility of being made to sit a foundation GCSE maths paper, the highest grade on which still falls below the national standard for a pass, others on the experience of first setting foot into a middle-class home as a teenager. If you’ve ever had a slight existential crisis in which you’ve thought ‘why does this matter? who are they to tell me what to do? I’m a human being; why do I have to abide by other people’s made-up rules?’ expect a similar feeling here. On a screen on the other side of the hall, images of governor of the Bank of England, Mark Carney, quaffing wine with George Osborne are interspersed with shots of Nike factory workers in China and homeless people on American streets. The speed at which these change, however, negates any clichéd, ‘everything’s run by the Illuminati’, ‘look how fucked the planet is’ reactions and instead leaves you feeling bewilderingly dismayed at how, as a race of animals, we have got to the point where the world is set up to sell us things we don’t need made by people who can barely afford to live for the profit of people who hold sway over our governments and leaders.

The relief from this overwhelming feeling of catastrophic despair comes from the small stage in front of Cardboard Box Mountain. On the night Culture Or Trash went along, the audience was treated to a handful of hip-hop artists talking, singing and rapping about what’s it like to grow up black in the UK, how ‘black’ is a lazy, homogenising term for a wealth of different identities and origins and violence within black communities. To hear people talk about the anxiety of making yourself as small as possible when taking a lift with an old lady so as to show her that you’re not going to attack her both shows the scale of the issues of prejudice and inequality we still face but, promisingly, the acknowledgement of it in a public space to accordant whoops from the audience demonstrates the ability and willingness for change. Utopia is ambitious but successful in the issues it takes on. The set by itself, put together by Block9, is enough to make the price of a ticket to this worthwhile; the collection of stories held within make it priceless.

Oh, and for fans of irony, the show is sponsored by Bloomberg Philanthropies, the charitable foundation set up by the former mayor of New York City for 12 years and multi-billionaire Michael Bloomberg. Now, back to pondering the panglobal problem of chronic poverty, corrupt governments and massive inequality…