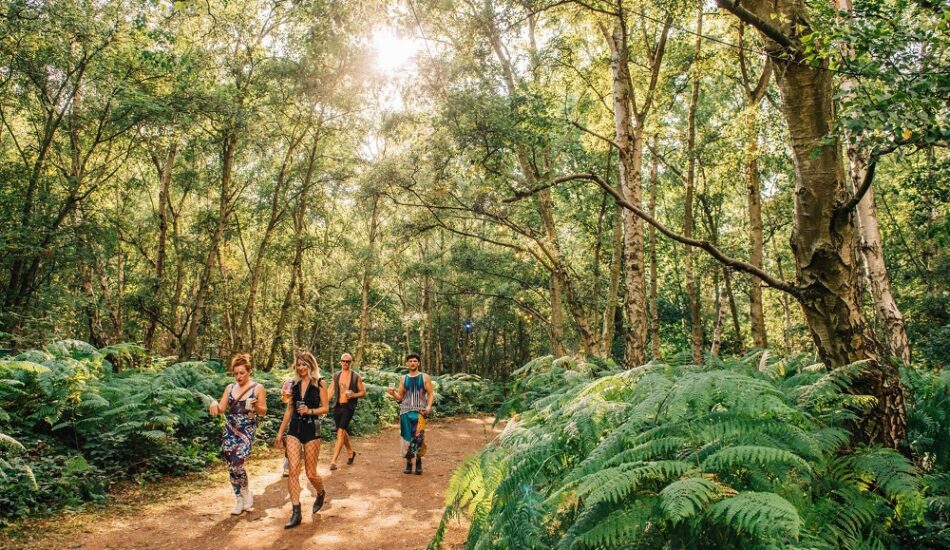 Culture Or Trash editor Adam Bloodworth finds total immersion in the woods at Lost Village festival. Review below, with more on why this northern gem achieves festi-equilibrium with fine food and proper dance music

Imagine the board room meeting: “We’ve got an idea,” someone must have said. “For creating the Lost Village festival. It’s going to be half incredibly posh, with Michelin-starred chefs cooking banquet feasts, and half forest raves, where everyone gets high by – amongst other things – jumping up and down on old abandoned cars, surrounded by derelict train carriages and piles of metal trash.”

Fine dining and hard seshing sounds an impossibly weird concoction, but at Lost Village, it works. This isn’t the only festival achieving this alchemy: Wilderness offers similar opportunities to dress well and eat well in a field, with partying going hand-in-hand. But Lost Village is way more intense: it takes dance music culture more seriously, with DJs making up around 80% of acts, and a sprinkling of live stuff to pep things up during the day.

“It’s one of the hardest things for festivals to achieve to make everyone feel warmly welcomed – whether they’re armed with six Stella Artois or waving down a glamping assistant for freshly chilled champagne. But Lost Village achieves that balance well.”

At the raves, people look as you’d expect: like they haven’t been to bed for days, perhaps weeks. Everyone’s fabulously involved; some haven’t left their dancing spot right in front of the DJ for six hours or more. At the classy banquet feasts, diners bowl in looking resplendent in freshly styled head-to-toe sequins. They appear like they’ve had twelve hours sleep on a memory foam mattress and pillow set. That’s because they have. They’ve been glamping in bell tents around a gorgeous lake, you see, well away from the main campsite where the average age is fifteen years younger than in boutique camping. At Lost Village, aspirational older party-goers that still fancy a wiggle in the woods once a year meet with the more mainstream festival crowd – but realistically, they don’t meet all that often. For much of the time, I suspect the glampers remain by the nice restaurants, comedy and talks tents, while the younger festival crowds dance for hours on end under cover in the woods, where anything goes.

The lake is where both worlds meet. It’s beautiful for walking around during a mini comfort break from dancing, and at the other side of it lies the banquet feasting tent, where this year Michelin-starred chefs hoping to avoid drunk teenagers falling in their fire pits included Santiago Lastra from London’s Kol restaurant, Great British Menu finalist Roberta Hall-McCarron and twice Michelin-starred Rafael Cagali from Da Terra in east London.

In the forest, a labyrinth of stages have individual names, but it’s more fun to forget that and wander. Mostly, the sound is immersive, with festival runners and former Radio 1 DJs Jaymo and Andy George installing speakers at the backs and sides so even those in the wings can hear the crisply incessant beats as they hammer through afternoon and into the night. A couple of forest stages are harder to get to the front of, and the sound needs some work. At one point in the forest, a punter turned a corner decorated with vinyl swinging from the trees and dropped his shoulders asking: “Where are we?” A second or two earlier, glancing up at the treetop canopy, I’d asked my group the same thing. Every forest turn reveals a new dopamine hit: a crowd outside the doorway of an obscure stage, a pathway that might end at a bar or maybe the lake or The Institute of Curious Minds, where talks included something on Bond and masculinity and the science of singledom.

Over at the main stage, the only stage not cloaked by trees, on Friday night the biggest crowd of the weekend gathered for a partly introspective, partly hyped-up set from Jamie XX, kicking off with Let’s Do It Again, perhaps the most-played tune from selectors across Europe at parties this summer. Tom Misch on Saturday and Bonobo on Sunday were equally special; particularly the latter, a soothing cacophony of brass instruments and electronic noise-making fitting for the finale.

“There are more sponsored booze stages, but when they’re serving great drinks and keeping festival and music culture afloat, there are better things to get principled about.”

At first, I’d thought there could be more live music – ie, not DJs – spread throughout the site and not only at the main stage, but actually every time we walked past the main arena during the day there was some sort of beguiling noise amplifying off guitars and live drum kits. In other words, if I’d wanted to make more effort to find live music, I could have, but I preferred getting lost, particularly at retro ’80s themed bowling alley-cum bar and games arcade Strike City.

The main challenging thing is that DJs end at 2am, with a few small stages for clingers-on to sink one final pint until just before three, which feels at odds with dance music culture and it’s a shame to miss the sunrise selfie on that inevitable one night that went too far. But then again, you can wander back to the tent, have an afters, and be asleep by four. The crowd – like always at dance events, contrary to the assumption made by some judgemental people – were lovely and were respectful in the campsite by mainly keeping the late-night/early-morning screaming to a minimum.

A friend compared Lost Village festival with Secret Garden Party, with the difference being that Lost Village is slightly more corporate, and I think that’s hitting the nail on the head. There are more sponsored booze stages, but when they’re serving great drinks and keeping festival and music culture afloat, there are better things to get principled about.

“If you’re ever going to splurge on a weekend of glamping, the seamless production around the festival site suggests Lost Village know what they’re doing, or pretend to with pretty good success anyway, so would use your money wisely.”

Over in the calming utopian dream zone that is the Glamping Village, punters wake a minute or two’s walk from the lake, fine dining, and hot tubs, with a direct path to the main stage. It’s clear what you’re paying for, and with clean toilets across the site the whole weekend, it’s also clear organisers take hosting their guests seriously. If you’re ever going to splurge on a weekend of glamping, the seamless production around the festival site suggests Lost Village know what they’re doing, or pretend to with pretty good success anyway, so would use your money wisely.

On the walk out to the main campsite, the average age is possibly 15 years younger. The restaurants fade into ‘BACON’ stands and chip butty kiosks. But then again, this is probably what the punters on this side want to eat. They aren’t here for the fine dining, and Lost Village does a clever job of keeping the two worlds of punters on different paths. That said, there needs to be food outlets in the main campsite. In the blistering heat, no one wants to walk twenty minutes for a bacon butty.

It’s one of the hardest things for festivals to achieve to make everyone feel warmly welcomed – whether they’re armed with six Stella Artois or waving down a glamping assistant for freshly chilled champagne. But Lost Village achieves that balance well.

There are no festival heads popping up on Sunday night to tell a story about how this festival has grown from a small gathering to what it is today, and no major ‘storytelling’ as you peruse the forests: but that’s exactly the point. It’s easy to feel lost at Lost Village, away on your own journey, and on those terms, it’s job done.